Weston FC has partnered with the Weston Rotary Club to provide high level training from our nationally renowned technical staff for kids ages 5-8 who love soccer and have a desire to get prepared for the highest level of play.

Training will take place at Vista Park beginning on August 24 and running until the end of May 2016. Training times will be Monday, Wednesday and Friday from 3:45-4:45. Monday and Wednesday will be tactical and technical training and Friday will consist of scrimmages among the players. Players will be provided with a Weston FC practice shirt at no charge.

A sample of the Weston FC nationally known coaches that will be conducting the training are: 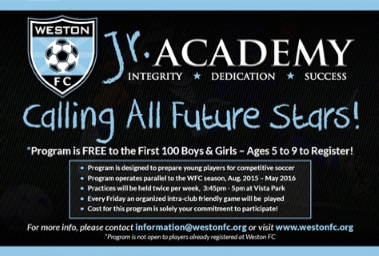 Currently there are over 30 Weston FC players playing at the collegiate level and over a dozen with pro youth clubs around the world. Alumnus Alejandro Bedoya is a regular fixture on the US Men’s National Team and played in all four World Cup Games in 2014. The Club consists of 1,100 players both boys and girls ages 7-18 and plays in local leagues and tournaments, as well as across the country and internationally. Weston FC hosts the Weston Cup and Showcase every Presidents’ Day weekend which is the largest tournament in the southeastern United States with 624 teams participating from around the country and internationally.

Weston FC provides a place for every player desiring to play at a competitive level and be coached by some of the best coaches in the US.