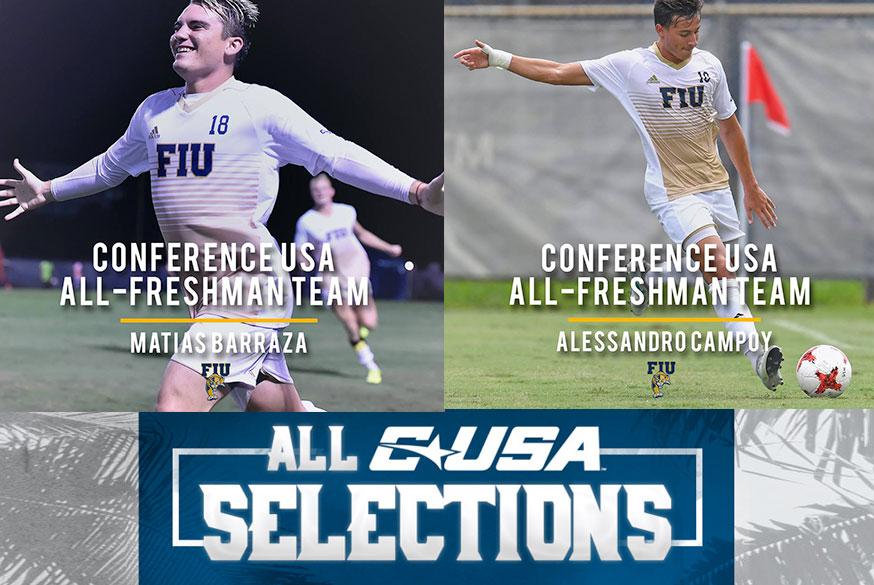 Junior Santiago Patino was voted men’s soccer C-USA Player of the Year, Offensive MVP and received the Golden Boot. Patino leads C-USA in goals (10), points (21), shots (27), goals per game (1.25) and points per game (2.62), and was named C-USA Offensive Player of the Week a record five times this year. The Orlando, Florida, native was awarded the Golden Boot for scoring the most goals in conference play with 10.

Golden Glove was awarded to the two goalkeepers with the most shutouts in league play, both with four. Old Dominion sophomore Mertcan Akar recorded four shutouts in eight games and had 40 saves. Freshman Enrique Facusse of Kentucky also registered four shutouts and has a .71 goals against average, the best in conference play, also earning him Freshman of the Year.

Aaron Herrera of New Mexico was voted this year’s Defensive MVP after anchoring the Lobos defense and registering two points in conference play. Herrera was named a 2017 PDL Players to Watch in College List and a Top Drawer Soccer Best XI Second Team.

FIU coach Kevin Nylen nabbed Coach of the Year after leading FIU to an undefeated season and the C-USA regular season title in his first season. Under Nylen’s guidance, the Panthers improved to 11-0-4 from last year’s 10-7-2 record.

Charlotte picked up three first-team honorees in Daniel Bruce, Callum Montgomery and Tommy Madden. Redshirt junior Bruce has four goals and nine points in conference play and on Nov. 6 was named C-USA Offensive Player of the Week. Junior midfielder Madden has been integral for the 49ers on both offense and defense, starting every game and registering his first-career goal this season. Montgomery helped the Charlotte defense to two shutouts in league play and assisted on a game-winning goal against Marshall.

FIU earned two more spots on first team with senior Paul Marie and sophomore Joris Ahlinvi in midfielder positions. Marie is right behind fellow teammate Patino in points at 12 and has four goals and four assists in conference play, and was named C-USA Offensive Player of the Week twice this season. France native Ahlinvi has nine points, two goals and is tied for first in assists with five in C-USA games, including a game-winner against New Mexico.

Rounding out the All-C-USA first team are South Carolina forward Luca Mayr and Kentucky defender Alex Bumpus. Mayr was named Offensive Player of the Week on Sept. 25 and has seven points with two goals in league play. The Austria native has started every game for the Gamecocks and leads them in points overall and in C-USA games. Senior Bumpus has been key for the Wildcats defense that has four shutouts on the year.