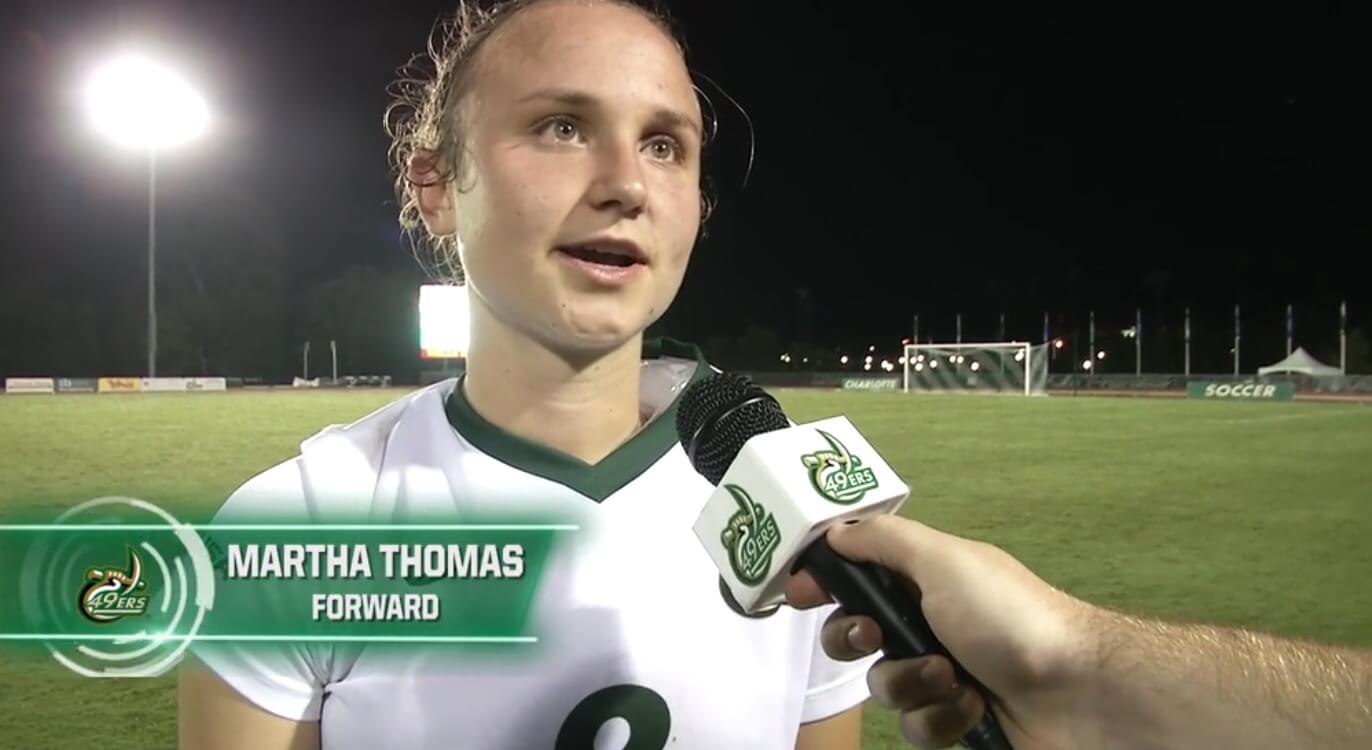 CHARLOTTE, N.C. – There’s a new queen on top of two prestigious records in Charlotte women’s soccer history, as senior All-America candidate Martha Thomas moved herself into sole possession of two program standards after a standout performance Friday night in the 49ers’ 3-0 triumph over Marshall in the Conference USA opener.

Thomas’ two scores, on a career-best nine shots, not only crowned her high honors in school history for career goals, but they also raised her into first place for all-time points. She surpassed Whitney Weinraub (2007-10) in both categories on her way to cementing herself with the best all-around offensive resume by any individual in the program’s 24 years. And she still has at least a half-season remaining to further boost her case.

The Weston, Florida, product set the career goals mark with the only first-half tally, giving Charlotte (6-3, 1-0 C-USA) the edge in the 29th minute. Senior Virginia Lingo played a long serve down the right side to sophomore Megan Greene. Greene continued with the ball forward before sending a cross into the penalty area, where Thomas out-ran her marking defender and blasted the ball into the back of the net at 28:01 for career score No. 40, topping the 39 by Weinraub.

After the Thundering Herd helped tighten up during the latter stages of the opening period, the Niners entered the break with the one-goal cushion. The margin doubled in the 62nd minute, as Greene did her best to keep pace with Thomas as the leading goal scorer for the team over the last two years. Her goal was set up by a service into the box from classmate Jamie Fankhauser. Greene had an initial attempt denied by Marshall (2-5, 0-1 C-USA) keeper Megan Bonelli but the rebound landed right at Greene’s feet and she wasted no time in poking it back over the line at 61:52.

Charlotte’s offense kept pushing forward, on a night on which it mounted a 24-to-9 shot advantage, and Thomas capped the scoring with under 10 minutes to play. Senior co-captain Kyla Clark thread a needle through the Herd defense to find Thomas, who was standing inside the six-yard box and proceeded to beat Bonelli 1v1 with her hard shot at 82:23 for the 3-0 final outcome.

Thomas’ second goal pushed her career point total to 106, best in school history. She began the night tied for third with 102 with Courtney Cook (1994-97), leapfrogged Hailey Beam (2006-09) who had 103 before initially drawing even with Weinraub before sliding her down into second place before the night concluded.

The 49ers had several other chances at padding their lead. Thomas nearly scored just 13 seconds into the match after the initial kick-off, while Greene followed up just over 20 seconds later on a header that sailed high. Sophomore Sophie Sipprell hit the post with an attempt, while Thomas also hit the post on her shot in the 10th minute.

Defensively, Charlotte continued to play strongly as well led by the stellar effort from freshman goalkeeper Abby Stapleton who finished with six saves in her second career shutout. Stapleton smothered chances by Marshall throughout both halves in addition to a leaping stop on a Rene Ross header in the 35th minute. Mary Lawman broke free right before the halftime horn but Stapleton played her position confidently and did not allow an equalizer late.

Chances for both sides continued after intermission. The Niners’ best non-scoring threats came in the 50th through the 52nd minutes, as a flurry of shots and back-to-back corner kicks created opportunities in front of the cage. A short time later, Farah Abu-Tayeh sent a shot from distance for Marshall that ricocheted off the crossbar and back out into the field of play.

In the 60th minute, Greene, Thomas and Sipprell were credited with three shots within a nine-second span but the Thundering Herd backline cleared the final two away, keeping the margin at just one at that point.

Thomas not only set a personal career best with her nine shots, but by placing seven of them on goal, she established another career high. Greene finished with five of her six attempts on goal as the top-scoring threat in Conference USA for the last two seasons continued to create havoc on opposing defenses.

Charlotte will enjoy a nine-day break before it suits up again, closing the four-game homestand. The 49ers will welcome FIU to town Sunday, Sept. 24, at 1 p.m., in the final home match of the month.